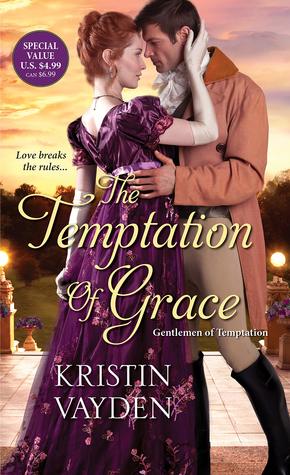 Dogged by gossip and scandal, Ramsey Scott, Marquess of Sterling, is the last man who should stand guard over lovely Miss Grace Morgan, much less fall for her. When the innocent’s first outings of the season land her in Temptations, the private club Ramsey manages, he longs to take her in his arms and keep her there, if only his past would allow it. Their friendship will have to suffice—but as Grace blooms in society, Ramsey feels her slipping from his grasp. Until she lures him into his greatest temptation yet.

She should never have come to his office unattended. But how else was Grace to get Ramsey’s romantic attention? Yet now she is left waiting for a proposal that may never come—and wondering if Ramsey’s vexing propriety will force her to marry another.

The Temptation of Grace by Kristin Vayden is all about temptation. How far can one resist it? Or let it go? Two best friends have liked each other for a long time. However, one of them holds back on the romance due to the past.

When the form of his temptation tempts him too far, it is up to him to decide whether his past be damned or not. Love is irresistible. Grace loves Ramsey, but she does not want to wait forever for him to propose. So the lady takes chances into her own hands. Risking the chance that Ramsey might feel the same way and take interest in her. Or let her fall into the hands of another gentleman. Ramsey is against the last option.

I loved the way society tries to rule over people’s lives. This group of people risk everything to make their lives their own. It’s bold, innocent, sweet, and refreshing. One and only true love…

There is the way Grace took matters into her own hands. She is a determined and smart woman not willing to wait a lifetime for what should be hers now. Unlike most women, Grace isn’t sitting on the sidelines until a man saves her. She makes her own choices.