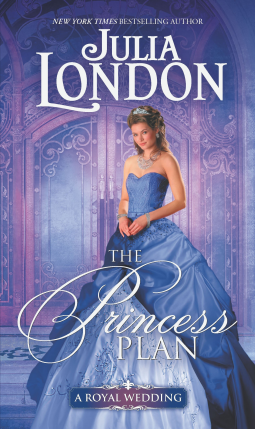 Princes have pomp and glory—not crushes on commoners

Nothing gets the tongues of London’s high society wagging like a good scandal. And when the personal secretary of the visiting Prince Sebastian of Alucia is found murdered, it’s all anyone can talk about, including Eliza Tricklebank. Her unapologetic gossip gazette has benefited from an anonymous tip about the crime, prompting Sebastian to take an interest in playing detective—and an even greater interest in Eliza.

With a trade deal on the line and mounting pressure to secure a noble bride, there’s nothing more salacious than a prince dallying with a commoner. Sebastian finds Eliza’s contrary manner as frustrating as it is seductive, but they’ll have to work together if they’re going to catch the culprit. And when things heat up behind closed doors, it’s the prince who’ll have to decide what comes first—his country or his heart.

The Princess Plan by Julia London is one of the most intriguing historical romances I have read. Her book starts off with ladies who own and work a lady’s gazette. One of them is excited and nervous in meeting a prince. Her goal was to meet at least one at the up coming ball. Low and behold she meet one alright. He was every bit as demanding, arrogant, and royal as one would expect. However, he thinks the world especially all the ladies should bow to him. All but the heroine. She does not bow to any man including a crowned prince. The foreign prince made me laugh so much. He was speechless that she would treat him like an ordinary man. One of the ton to be exact. I loved how Eliza put Sebastian in his place more than once. I was proud of her. And I enjoyed watching her kick his princely butt on occasion.

Julia London’s novel is a breath of fresh air. It’s different in some ways but similar in other ways. The mystery around the death of a close friend to the crown prince was interesting. Then the mystery brought on another round of mystery, causing the whole thing to become a deeper and more satisfying read. The growing tensions between the characters was fun to follow. A prince having to do well, always in the spotlight, and having to find himself a bride is not exactly what Sebastian wanted. But he is expected to do certain things and he tries.

Overall, The Princess Plan, is by far a great book. I loved the humor, the high tensions, and the romance.