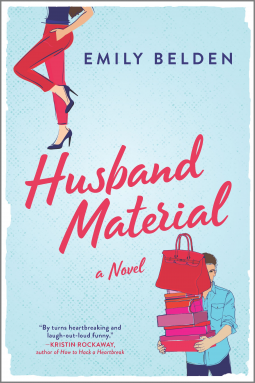 Twenty-nine-year-old Charlotte Rosen has a secret: she’s a widow. Ever since the fateful day that leveled her world, Charlotte has worked hard to move forward. Great job at a hot social media analytics company? Check. Roommate with no knowledge of her past? Check. Adorable dog? Check. All the while, she’s faithfully data-crunched her way through life, calculating the probability of risk—so she can avoid it.

Yet Charlotte’s algorithms could never have predicted that her late husband’s ashes would land squarely on her doorstep five years later. Stunned but determined, Charlotte sets out to find meaning in this sudden twist of fate, even if that includes facing her perfectly coiffed, and perfectly difficult, ex-mother-in-law—and her husband’s best friend, who seems to become a fixture at her side whether she likes it or not.

But soon a shocking secret surfaces, forcing Charlotte to answer questions she never knew to ask and to consider the possibility of forgiveness. And when a chance at new love arises, she’ll have to decide once and for all whether to follow the numbers or trust her heart.

Husband Material by Emily Belden is an emotional rollercoaster ride. The first several chapters felt slow because it was just an insider’s guide to the main protagonist’s life. Okay, she’s single, was married, and is trying to find her HEA. Then, I find out she lost her husband while they both were still young. My heart broke right there and then. Wow. A surprise. I also like dhow she dumped losers like the fitness nut. That was hilarious and done well. I wanted to smack the loser nut for his talking bad to Char. After that, I finally get to meet the other main character. It was like: Finally! This is where the action in the book started and sort of kept moving.

This book, Husband Material,  would easily have been a 4-star rating, if it didn’t drag so much in the beginning. The start of it had me wondering okay, so where’s this other character to shake this book up a little. There was a dash of humor here and there and then the sadness of Char’s loss was great. I wished there was more than tiny bits of it throughout the novel. The book was heartfelt and entertaining-it just takes a long while to get into it. Skip the beginning some, and the rest is okay. Husband Material could easily be another Hallmark movie if a lot of the earlier background was taken out. I would definitely then watch this book on TV.