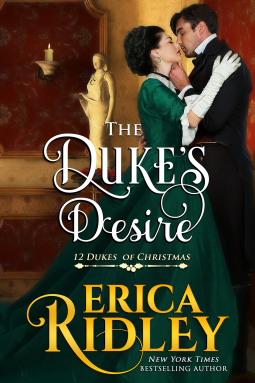 Meg Church adores two things: life in a village of perennial Yuletide, and the freedom of being a spinster with no reputation to protect. Oh, very well, three things: She’s harbored a secret tendre for Christmas curmudgeon Lucien le Duc since the moment she first glimpsed him. But the sexy blacksmith won’t give her the time of day, much less a night of torrid passion.

Ever since Lucien le Duc was forced to flee his beloved France during the revolution, his all-consuming goal has been to recover not only his lost land and fortune, but also his rightful place among the French aristocracy. He would never be distracted by an English dairy maid’s sultry glances… or her soul-consuming kisses… or the temptation to turn one night into forever…

The 12 Dukes of Christmas is a series of heartwarming Regency romps nestled in a picturesque snow-covered village. Twelve delightful romances… and plenty of delicious dukes!

~~~
The Twelve Dukes of Christmas:

The Duke’s Desire by Erica Ridley is a laugh-out-loud kind of romance. Think of a romantic comedy combined with a historical romance and you get, The Duke’s Desire. I found is refreshing. The way the leading female protagonist spoke was charming and hilarious. I loved her character! Meg spoke in such a blunt yet bold way. It even had her bestest lady friend plus, the leading Duke of Desire raising their eyebrows at her. The things she says…it was awesome. I cannot quote what she said; however, I do say that you have to read this book and read it! I can promise you that it would not be a waste of your time. Also, I enjoyed how the main players mentioned were from opposite sides of a war and from different backgrounds. A poor farmer’s maid and a wealthy titled Duke made for a great read. Erica Ridley has done it again. She has managed to capture my heart and soul and my whole attention starting from the first page. Overall, I highly recommend this historical novel to all readers.