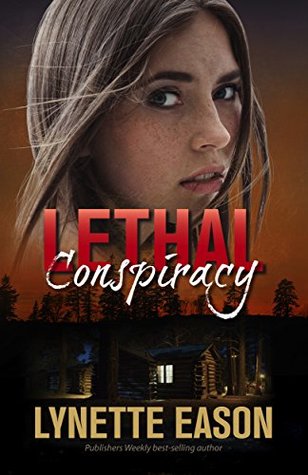 As a professional fundraiser for charitable organizations, Lillian Maloney, is used to sweet talking people into seeing things her way. But when she sees her father’s campaign manager murder a woman in the parking garage of his office building, no amount of sweet talking can save her.

Now, she’s Lilly Peterson, and on the run from the men he’s hired to kill her. A close call brings Firefighter Jason Tanner into her life. He believes her when she tells her story and after another attempt on her life in the hospital, helps her escape.

While on the run with this fascinating woman, Jason finds himself falling in love—and she seems to return the sentiment. Unfortunately, neither one of them may live to do anything about it as the killer closes in. With only a handful of people they can trust, they come up with a plan to turn the tables on the killer—and can only pray it doesn’t backfire.

Inside Lethal Conspiracy by Lynette Eason, I was trailing a young woman on the run from not one but more than one killer. The only thing she doesn’t know is that one of the killers is someone she cares about. After witnessing a murder happen, then finding out that her friend was also killed because of what she witnessed, Lilly has too much on her shoulders. She has to survive. It was her lucky day when a handsome firefighter came to her rescue, From there, the action, suspense, and romance only got better.

Lilly is an innocent woman desperate to make her dad love her. Or at least, want to see her as hid child. Only none of that happens. It turns out fate has other ideas. Especially, the quest of letting the lies and betrayals come out to light. Lilly’s family will be on one rollercoaster to another.

Family means the world to Lilly and the firefighter, Jason. Together, they chase this danger and call it on its ugly head. Both have a lot to risk. Their lives and hearts are on the line.

Lynette Eason had me so captivated by this beautifully told story. I was engulfed in the emotional toll and in the romantic scenes. This is one romantic suspense writer who can hook any reader with her characters alone. I loved reading this novella.