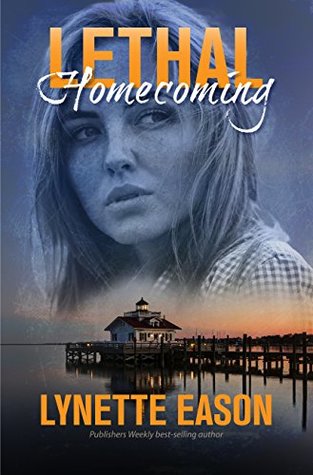 Six years ago, danger sent Callie Ainsworth running, and now all she wants is to go home to Tanner Hollow. She’s received word that the danger is over, so she is free to be reunited with her mother and sister. When someone tries to kill Callie before she even reaches the driveway, she realizes she’s made a horrible mistake and danger still lurks. But this time she’s not running away.

Nolan Tanner had loved Callie as a teenager and has never gotten over her sudden, unexplained departure. When he rescues her from a killer on her first night home, old feelings come rushing back. Still angry at her for leaving him six years ago, he soon realizes she had good reason for taking off–and that he’s still holding out hope for a future with her. Can he catch the person who wants her dead and convince her she needs to stay home for good?

Lethal Homecoming by Lynette Eason hooked me right into the characters’ lives. It grabbed me from the start. The writing is well-done. Readers will find it action-packed, romantic, and deadly. The suspense kept getting better and better with every page! This is one romantic suspense novel that made me laugh and cry along with the protagonists.

Nolan Tanner made for a great hero. He has this confidence that was charming and heavily relied on by the heroine during times of danger. His quick mind was amazing. Nolan also has a big heart of gold. Especially, where Kallie is concerned.

Kallie Ainsworth has a had a lot of ups and downs in her life. Losing her biological father only to have her mother marry a monster of a man. That same monster who tormented her physically and mentally. Her and her family were under a lot of pressure. Then, add in two deaths and a loose killer in their circle and everything was insane. Kallie still has feelings for Nolan.

In this novella, there are big topics of abuse, rape, murder, and God. I loved reading it. Lynette Eason knew how to draw my attention and how to keep it.