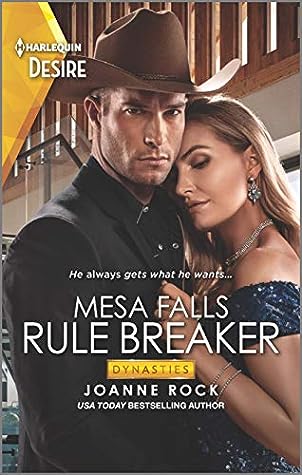 He always gets what he wants…

That’s never stopped him before.

Rebellious rancher Weston Rivera knows saving April Stephens during a blizzard at his luxury retreat is risky. But it’s not nearly as dangerous as the desire blazing between them. After all, Weston is a prime target of April’s current financial investigation at Mesa Falls—and he’s hiding secrets. Now their searing passion is melting the lines between business and pleasure…even as it threatens Weston’s entire world.

Joanne Rock knows how to stir up trouble, suspense, and heat. The passion in this novel was hot. The characters’ instant attraction could be felt on every page. Things were just heating up between the rancher and financial forensics investigator. I loved how each protagonist had something happening or happened in their lives that was troubling them and also how they were willing to share it with each other. They were hesitant at first but slowly they peeled away their layers and shared everything. The romance was done perfectly. I felt attached to the characters emotionally. They won over my heart. A rancher who is loyal and protective with deep secrets that haunt him and a woman whose mother has a decline in health. I found it entertaining, heartfelt, and sexy, too. Joanne Rock’s latest book, Rule Breaker, will break the mold for all contemporary romance novels. It goes beyond just a sexy thrill. It is deep, engaging, and left me never wanting to leave Mesa Falls.