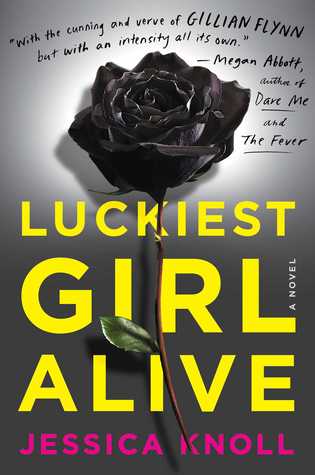 As a teenager at the prestigious Bradley School, Ani FaNelli endured a shocking, public humiliation that left her desperate to reinvent herself. Now, with a glamorous job, expensive wardrobe, and handsome blue blood fiancé, she’s this close to living the perfect life she’s worked so hard to achieve.

But Ani has a secret.

There’s something else buried in her past that still haunts her, something private and painful that threatens to bubble to the surface and destroy everything.

With a singular voice and twists you won’t see coming, Luckiest Girl Alive explores the unbearable pressure that so many women feel to “have it all” and introduces a heroine whose sharp edges and cutthroat ambition have been protecting a scandalous truth, and a heart that’s bigger than it first appears.

The question remains: will breaking her silence destroy all that she has worked for—or, will it at long last, set Ani free?

Luckiest Girl Alive by Jessica Knoll is the worst book I have read. Okay the worst of the worst but still…it hits so close. I struggled with reading the beginning chapters. The opening showed me that the protagonist obviously has issues. A lot of issues. Mental, emotional, and eating issues were mentioned for this character. Many times, the character had to grind her teeth to hold in her anger. The anger felt so high I felt curtained she would murder someone on the spot. It was plain that people treated her badly because she could eat so much and none of it stuck. She also was getting married, but hated all the marriage preparations so much I questioned why she wanted the marriage in the first place. The way she and the writer talked about the going to be groom, was with great disliking. He wanted to be active and fit. He fought with her a lot. They had heated debates. He made her feel less than what she was. A woman that should have been respected and loved by this so-called man. I didn’t like either of the characters. Not the leading female character nor her ex-fiancé. I couldn’t stand either of them. The book was written in a way that made me want to throw it away. All in all, this book was an absolute waste of time to read. Full of great issue topics but written poorly. I was not entertained nor did I feel sympathy for the Ani (protagonist).