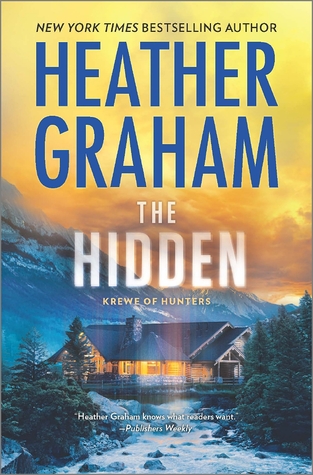 Estes Park, Colorado, is a place of serenity. But it wasn’t always so serene. Shortly after the Civil War, Nathan Kendall and his wife were murdered there, leaving behind a young son. The crime was never solved.

Now…historian Scarlet Barlow is working at a small museum attached to a B and B, the same building where that murder occurred. She recently came to Colorado, reeling after her divorce from FBI agent Diego McCullough. Diego—who’s just been asked to join the Krewe of Hunters, a unit dealing with “unusual” situations…

When Scarlet unwittingly takes pictures of people who’ve been murdered—just like the Kendalls a hundred and fifty years before—the police look at her with suspicion. Then the museum’s statues of historic people, including Nathan Kendall, begin to talk to her, and she knows it’s time to call her ex-husband. Diego heads to Estes Park, determined to solve the bizarre case that threatens Scarlet’s life—and to reunite with the woman he never stopped loving.

The Hidden is the 17th Krewe series novel. I am in love! This book has everything I enjoy reading. There is action, suspense, paranormal elements, good versus evil theme, and romance. The mystery of murder both past and present ties in well. Heather Graham brings me to the edge of my seat in anticipation with every page. Anything can happen and the suspects are many.

Back in time, an ex-robber slash ex-confederate soldier retires to live life like any other person. But it seems someone has other plans. There’s a plot of land for sale by an owner who can’t afford to keep his ranch going. Then, there’s the gold that the ex-robber finds. However, he does not do anything with it. He just uses the land for ranching and married the love of his life. Only soon, both he and his wife are brutally murdered. Leaving behind their only child a son.

In the present, one man the son of a dad confederate soldier and ex-robber keeps the land as a museum with all the artifacts from his father’s time period. Only strange things are happening and someone is murdering people on the land. But the question is who and why.

Greed has a way of making people do the worst things.

Overall, I was hooked with this novel. Heather Graham has a brilliant mind when it comes to creating the perfect suspense novels. I also enjoy how she intertwines different things and makes one grand adventure out of them.