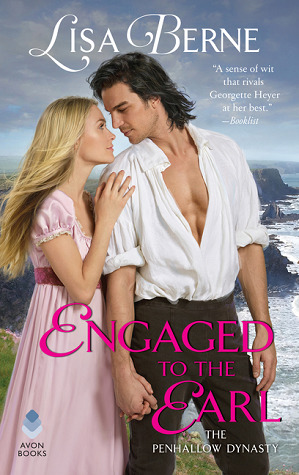 A spirited debutante—a brash adventurer—the perfect fiancé—and good intentions gone terribly, deliciously bad. The Penhallow Dynasty continues in this sparkling Regency romp!
Christopher Beck came striding into a glamorous London drawing-room and can’t believe his eyes. The last time he’d seen Gwendolyn Penhallow, she was a dreamy, strong-willed girl with a wild imagination, and now she’s a beautiful and beguiling young lady… who’s engaged to Society’s darling, the Earl of Westenbury. Christopher had fled England to seek adventure elsewhere. Has he found it here, too—the most delightful adventure of his life?

Gwendolyn is sure she’s betrothed to the most wonderful man in the world. But then, shockingly, Christopher Beck shows up. Nobody has heard from him in years—and not only he is very much alive, he’s also sinfully attractive, blithely unconventional, and disturbingly fun to be with. Which wouldn’t be a problem, except for the fact that she’s, well, promised to another. And just what on earth is she going to do about it?

Engaged to the Earl by Lisa Berne is a fun historical romance read. I was laughing along with the characters throughout the book. The sweet innocence and personality of the heroine was refreshing. In all of the historical novels I have read, I have never encountered such a character like Gwennie. She is bright, kind to a fault, and a breath of fresh air. She makes others behave in a way. She is the kindest most generous person readers will get to meet. It’s hard to behave in any other fashion when around Gwennie.

Gwennie is a childhood friend to Christopher. Christopher has always looked out for Gwennie as a kids. As adults, he finds himself still looking out for her. His fists curled wanting to fight the man behaving so badly towards her. But he uncurled his fists slowly and watched as his friend, took care of her situation herself. He smiled. Christopher was proud of her. Moments like that gave a deeper insight as to how close their friendships is and how much respect was between them.

Christopher feels like a failure. He doesn’t want to be handed down money. Christopher wants to earn it. I respected this hero. He had a way of wanting to make it on his own and he did. Christopher had anger issues but he soon changes and becomes a great man. One that Gwennie still cares for deeply.

I loved this friends to lovers historical romance. Lisa Berne writes well. I felt like some of the other characters were not as believable as the two man characters were. For instance, the fiancée that Gwennie was engaged to felt like he was half a man. Most men in his position would take what they wanted anytime they wanted, without any care. Yet he dragged his feet in many ways. There were other things too about him that just didn’t feel quite right for his position.

All in all, I enjoyed reading this book. It was romantic, sweet, and hilarious. The things Gweenie talks about will leave you both surprised and entertained.