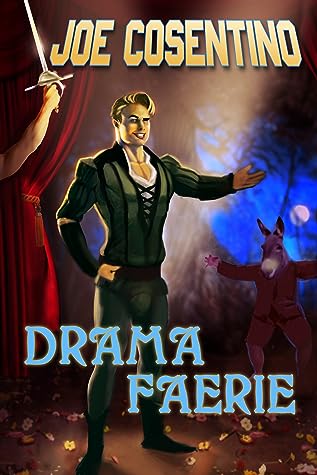 It’s summer at Treemeadow College’s new Globe Theatre, where theatre professor Nicky Abbondanza is directing a musical production of A Midsummer Night’s Dream co-starring his spouse, theatre professor Noah Oliver, their son Taavi, and their best friend and department head, Martin Anderson. With an all-male, skimpily dressed cast and a love potion gone wild, romance is in the starry night air. When hunky students and faculty in the production drop faster than their tunics and tights, Nicky and Noah will need to use their drama skills to figure out who is taking swordplay to the extreme before Nicky and Noah end up foiled in the forest. You will be applauding and shouting Bravo for Joe Cosentino’s fast-paced, side-splittingly funny, edge-of-your-seat entertaining ninth novel in this delightful series. Take your seats. The curtain is going up on star-crossed young lovers, a faerie queen, an ass who is a great Bottom, and murder!

Drama Faerie by Joe Cosentino spins a whole new twist to Shakespeare’s famous play, A Midsummer Night’s Dream. Inside, I met the usual cast of characters found with the main team. Nicky and Noah along with their adoptive son and friends, are once again solving another murder case. Nicky takes being director seriously but also comes of charming. Noah balances out his partner, Nicky. Taavi, is their adoptive son who thinks nothing but acting is the life for him. It’s great that the kid has dreams and wants to act so badly. I enjoyed following his character. Chores were not on Taavi’s high list. It was comical.

Joe Cosentino’s writing is entertaining from the get go. As always, Nicky mentions something funny and bold and most would be both shocked and surprised. That’s what I like the most about this series and this novel. It’s different. Drama Faerie is unique even for LGBTQ reads. The cast of characters makes it a one-of-a-kind show. The love of theater is present, as well as humor. I can always count on Nicky and Noah to make me laugh throughout the book. They work so well together. The mystery, mayhem, and drama are what draw me to this book. Surprises are everywhere. Just when I think I know something, I am thrown for another loop. The best novels, are the ones a readers cannot predict on what will happen. This read is suspenseful and keeps me on the edge of my chair. I recommend it to all murder mystery lovers.