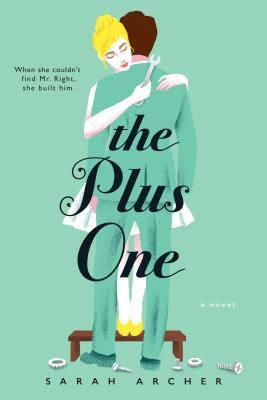 A hilarious and heartwarming debut novel about a brilliant but socially inept robotics engineer who builds her own wedding date to her sister’s wedding, and learns more about love than she ever expected.

Meet Kelly. Twenty-nine, valedictorian, and a brilliant robotics engineer to boot. While her professional life is on the rise, her personal life is struggling to get off the ground.

With her sister’s wedding looming and her attempts to find a date becoming increasingly cringe-worthy, Kelly does the only logical thing: she builds her own boyfriend, if only to get her mom off her back about being perpetually single. Kelly planned to pass off her robotic masterpiece, Ethan, as her other half just until the wedding. But then she can’t resist keeping him around even after the “I do’s.”

Ethan is just too perfect–gorgeous, attentive, smart (he does have Google for a brain), all topped off by a mechanical heart endlessly devoted to her. When Kelly is with him, she becomes a more confident, spontaneous version of herself. Plus, for the first time, her mother is actually proud of her.

But as the struggle to keep Ethan’s true identity a secret threatens to detonate the career Kelly has worked so hard for, she knows she has to kiss her toy boy goodbye.

There’s just one problem: she’s falling for him.

The Plus One by Sarah Archer is a complicated mess involving self-esteem issues and a programmed robot. The romance between the two was strange. It was programmed to like her and everything about her. So, this relationship was one sided, mostly. Kelly was an unlikable protagonist. Her robot, Ethan, was so easy to like. I liked him more even though she created and programmed him. The way he reacted to things and did them came outcharming, fun, and entertaining. This novel’s biggest question that loomed over the pages was if Kelly could ever be happy in life with a real man after creating Ethan to be her perfect match. It was weird the way she thought so much about Ethan the robot and how she reacted to him. It reminded me of a sixteen year old girl with her first crush.

However, as they story got to the middle I was intrigued to see where this whole situation with Kelly and her robot, Ethan, would go. It got more exciting and more emotional. As the pages passed, it got weird-the romance. The romance was weird because it was with a robot and not an actual man.

The ending had me with tears. I knew by the point, Kelly was beyond in love with her robot. Ethan is an unforgettable character. He made the plot come to life. The moment he stepped upon the stage and gave Kelly the okay nod, it was then that I keep asking myself-did Ethan know she was going to shut him down? Where was there relationship going to go after that moment? I am still wondering those questions. But Kelly changed, and she’s giving life-as scary as it is for her-a chance.