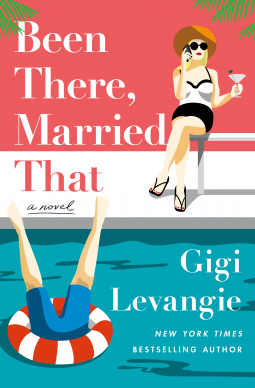 Agnes Murphy Nash is the perfect Hollywood wife – she has the right friends, the right clothes, and even a side career of her own as a writer. Her husband Trevor is a bigshot producer, and from the outside it looks like they’re living a picture-perfect celebrity life, complete with tennis tournaments and lavish parties.

But the job description of a Hollywood wife doesn’t cover divorce, which is the way Agnes’ life is headed after she comes home one day to find her credit cards cancelled and the security passwords to get into her enormous LA home changed. Oh, and there’s a guy there whose job it is to tase her if she tries to enter…which she does. Needless to say, Agnes’ husband is dead set on making sure she loses big time, but Agnes isn’t the type to just lie down and take it. In a world of fremenies and hot nannies, personal psychics and “skinny” jello shots, Agnes may be losing her husband, but could that mean getting her own life back?

Been There, Married That is a drop-dead hilarious battle of wills that will make you laugh out loud, cringe, and keep turning the pages to see what crazy disaster will happen to Agnes next…and how she’ll rise from the ashes.

Been There, Married That by Gigi Levangie had moments where, I wanted to like this book. Tiny tidbits were charming. Most of it was just crazy stupid stunts from each character. The husband is a jerk. He’s a producer, blocked his wife’s credit cards, and prevented her from their home. Agnes had no clue whatsoever. She went from trying to be perfect to failing every second. Her husband doesn’t want her, her daughter was having issues, and Agnes herself was a complete mess. I could not connect with any of the characters. This book was not entertaining. I expected so much and it never went anywhere. Even the ending felt unfinished. The whole showed two adults having tantrums and being rich snobs. Their anger and bad attitudes was not helping me like either of them. This book was a waste of time to read.