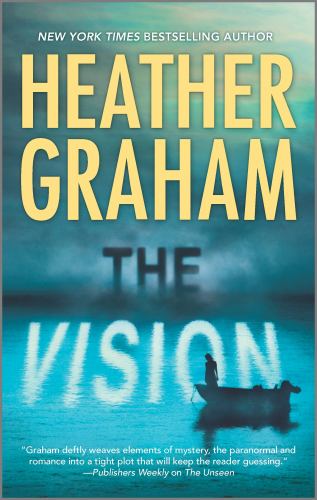 When Deep Down Salvage begins the hunt for the Marie Josephine off Key West, it seems like any other dive—until Genevieve Wallace sees the vision of a dead woman in the water.

Terrified and confused, Gen is haunted by the memory. But no one, including her diving partner Thor Thompson, believes she saw what she knows she saw. Then a dead woman washes up on shore, and everyone assumes this is Genevieve’s “vision.” Genevieve knows better. This dead woman is definitely not the ghost she encountered but another victim of the same brutal killer.

Sensing that the threat of death is coming closer, she and Thor are forced to acknowledge that some things can’t be explained but simply are. Somehow they have to link a violent past with a present-day mystery…because if they don’t, the power of death will possess them, too.

The Vision is the perfect suspense novel. I did not have a clue as to who the serial killer would be until the killer was caught towards the ending. Up until that moment, I was completely clueless and so were the protagonists and their friends. There was a dark shadow that hung over the pages. One of their inner circle of friends had to be the killer. But the question was, who? The police had very little to go on. The heroine had a vision of a dead woman. No one believed her until a dead woman was found. However, it wasn’t the same dead woman she found in the water. Therefore, everyone knew there was probably a killer at large. The evidence was non existent. Someone was toying and frightening off the innocent members of the group. When they got too close, or wouldn’t let the case rest, the serial killer came after them.

Paranormal elements were found here. There were some dead ghosts that popped up and added more depth to this book. One of the ghost added some humor to it as well. He ended up irking the hero of the book until the hero finally admitted something.

The romance that bubbled up was instant, hot, and amazing!

Heather Graham is a pro at creating the best romantic suspense reads. I haven’t found a book of hers that I haven’t liked yet. I was surprised to meet a member of the Krewe Hunter FBI group! I loved the Krewe Hunter series! If you haven’t read that series yet, you must read it too. Overall, I loved this novel.