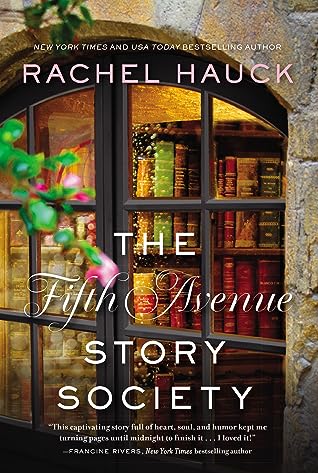 An invitation to join The Fifth Avenue Story Society gives five New York strangers a chance to rewrite their own stories.

Executive assistant Lexa is eager for a much-deserved promotion, but her boss is determined to keep her underemployed.

Literature professor Jett is dealing with a broken heart, as well as a nagging suspicion his literary idol, Gordon Phipps Roth, might be a fraud.

Aging widower Ed is eager to write the true story of his incredible marriage.

Coral, queen of the cosmetics industry, has broken her engagement and is on the verge of losing her great grandmother’s multimillion-dollar empire.

When all five New Yorkers receive an anonymous, mysterious invitation to the Fifth Avenue Story Society, they suspect they’re victims of a practical joke. No one knows who sent the invitations or why. No one has heard of the literary society. And no one is prepared to bear their deepest secrets to a roomful of strangers.

Yet curiosity and loneliness bring them back week after week to the old library. And it’s there they discover the stories of their hearts, and the kind of friendship and love that heals their souls.

Rachel Hauck is one of my favorite writers. She writes well-written stories. Books like this one, The Fifth Avenue Story Society, was done perfectly. I liked the fact that her characters were not perfect beings. Their troubles unite them as they were invited by an unknown to meet at an unknown place to them. Yet they kept on returning to meet there, at the library. It was intriguing on how each of these five protagonists were invited and how their journeys would end. Heartfelt, mysterious, and luring-this novel had my full attention. A contemporary tale of New Yorkers healing and moving forward in their lives. They also made new friends and fell in love.